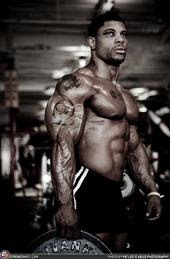 OK, I just have to share with y'all something that happened tonight. Our family was sitting at the kitchen table, eating dinner together when Q(my boyfriend in the pic to the right) suddenly had a brilliant thought...and I say "brilliant" with as much sarcasm as possible! He decided he would try putting his foot up to the table JUST LIKE ME!!!! First, he tried to get his right leg up....and failed. Then he tried and tried to get his left leg up. Well, he got it up there alright!! He looked VERY uncomfortable. The look on his face was totally priceless when he looked at me and said, "I'm stuck!" I laughed at him and told him that THAT really sounds like a personal problem! He then convinced that he really was stuck!! I was laughing my ass off at this big man of mine with his leg stuck way up on our table. It was quite a sight!! I then decided to be a nice girlfriend and help him out of his predicament. I carefully pushed his leg back down to where it belonged, but even that was somewhat painful to watch(and hear.) GEEZ!! Was all that moaning and groaning really necessary? I swear, men are such babies! LOL. I bet he'll NEVER try that again!! I told him he'd better not try driving like me either. hahahaha
I'm sure if you just picture this in your head, you will laugh as much as I did!!!
Posted by Barbie at 6:36:00 PM

Email ThisBlogThis!Share to TwitterShare to FacebookShare to Pinterest
Labels: Q....stuck

Lol Hes a big dude; I can't imagine. If wants to do it like you start him out small like doing laundry Hah!

Both of you take care!

Sis, I almost wet myself! I invisioned the whole thing, I saw Q looking like a philly soft pretzel, and the look on your face. I haven't laughed that hard in ages, thanks for the much needed ab work Q. lol Priceless. Then I read "blessed" and cried like a baby. I felt what it was like to be bi-polar! lol
Luv you too sista! God is an Awesome God! Thank You for the shout!
Oh, Q you must humble to the powers of "Galactic Bootie" and "Tower of Power Toes" it's just not within your reach. smile

I can do ALL things through Christ, who strengthens me.
Philippians 4:13

Barbie
There's so much to know about me! Most of it can be found on my website: www.FitnessUnarmed.com Basically I'm just a fun chic, a mom, a jr. high youth group leader, NubAbility Athletics coach, and a former fitness competitor. Most importantly though, I love Jesus! I'm a pretty open book, which is why I decided to start blogging. I thought I'd share with you some of my deepest thoughts, goofy thoughts, and simply what goes on in my everyday life. My life can be entertaining, emotional, inspiring, and comical at times. I sincerely hope you enjoy what I have to say!